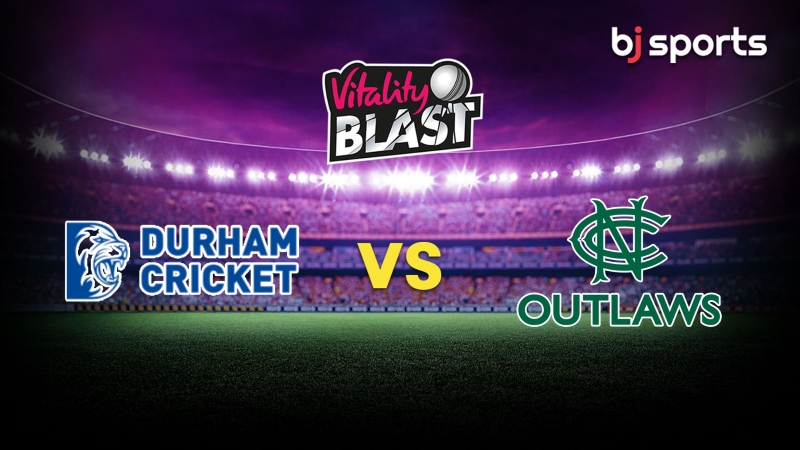 In the 2022 Vitality Blast, Durham will face the Notts Outlaws. On Friday, June 24th, the game will begin at 18:30 local time at The Riverside in Chester-le-Street.

Durham have seven points from 11 games and are ahead of only one other team in the North Group, Worcestershire Rapids. They have not won any of their last three tournament games since a shock home victory over Lancashire Lightning a fortnight ago. Durham were defeated by Leicestershire Foxes by 51 runs in their most recent completed match. After Australian Andrew Tye took 5-38, the North East outfit held the Foxes to 157-9. Unfortunately for Durham, no one scored more than 22 points, and they fell far short.

Notts Outlaws ended a three-game losing streak in the 2022 Vitality Blast on Thursday evening with a 94-run victory over Derbyshire Falcons at Trent Bridge. Joe Clarke (38 from 17), Alex Hales (55 from 23), Ben Duckett (63 from 38), and Stephen Mullaney (45 from 20) all contributed significantly to the Outlaws’ 247-6 victory. Samit Patel took 3-32 and Zak Chappell took 3-28, with Steven Mullaney returning 2-17 from 4 overs.

The Chester-Le-Street wicket will provide something for the bowlers. The forecast for Friday’s game is for light rain showers with a light breeze.

Both teams will be eager to win the toss, bat first, and score more than 190 runs. The previous match was won by the team that batted first.

With rain forecast for Friday’s game, teams will be eager to win the toss, bowl first, and limit the opposing team to the smallest possible team. The previous two matches at Chester-Le-Street were won by the team that batted first.

In the batting department, the team will look to Alex Hales, Ben Duckett, Joe Clarke, and Steve Mullaney to deliver the majority of the runs and help Notts Outlaws post a competitive score. The onus will be on bowlers like Luke Fletcher, Matthew Carter, Zak Chappell, Steven Mullaney, and Samit Patel to provide timely breakthroughs.

Notts Outlaws are the favorites to win this match.

Notts Outlaws have a very talented group of players who are unstoppable when it comes to winning. They have, however, been inconsistent, with players throwing away well-set wickets. We predict a close game with Notts Outlaws taking the victory.