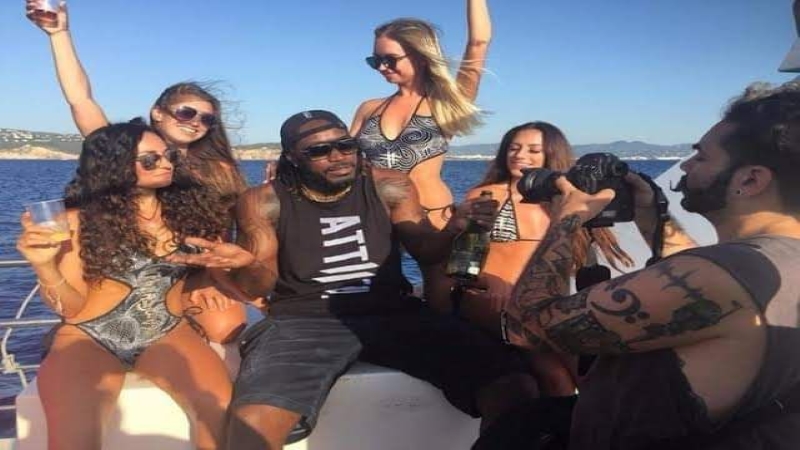 He is enjoying complete leisure. He is not even in the team announced by West Indies for the World Cup. Chris Gayle is currently taking a break from twenty-two yards. But the destructive West Indies batsman is in the headlines as much on the field as for his off-field activities.

This Caribbean cricket star likes to be entertained. This hard hitter batsman repeatedly made headlines due to his colorful life. Because of that colorful life, Gayle is once again in the headlines.

21 September of this month is the birthday of Gayle, known as ‘The Universe Boss’. And he organized a party before the occasion of his birthday. The party took place on a beach in the Pacific Ocean. There were only a few women who were invited by Gayle.

Gayle spends the whole day in the blue sea with these young women in a short dresses of different ages. Where there was food arrangement. This Caribbean star danced with the rhythm of the song. Gayle shared the video of the dance with her fans on social media and wrote, ‘These women are not going away, I’m not leaving them either.’

In this era of T20, he is called the peddler of entertainment. Gayle’s life is all about cricket, women, and parties. Enjoys life outside of cricket. After seeing Gayle’s colorful life, who would say that the universe boss is going to turn 43 after a few days?

The video published by Gayle with women has also gone viral. The 42-year-old favorite cricketer is also being wished in advance on his birthday by his fans-supporters and well-wishers in the comments section. Meanwhile, although he has not announced his official retirement yet, he has not been seen in the Caribbean jersey for a long time. However, Gayle is playing in various franchise leagues. According to West Indies media reports, he will continue playing cricket as long as he enjoys it. Age is just a number to Gayle.