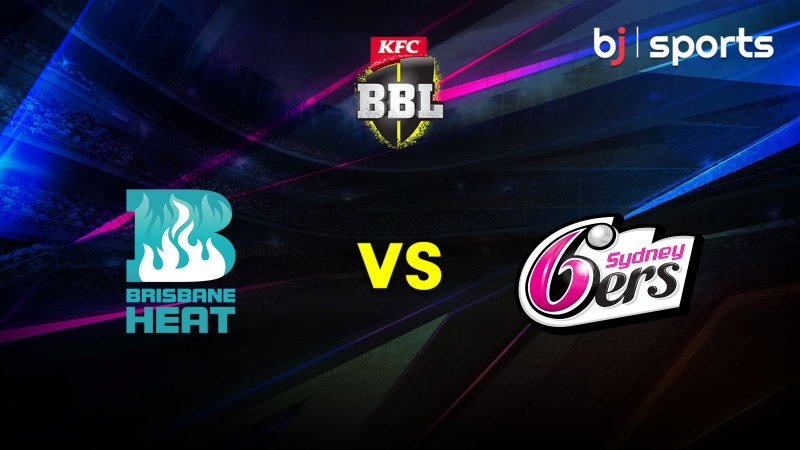 On Sunday night at the Gabba, Brisbane Heat will host Sydney Sixers in game 25 of the 2022–23 Big Bash League. With just one victory in their first five games, the Brisbane Heat are at the bottom of the standings. With eight points, the Sydney Sixers are tied for first place with the Perth Scorchers and Sydney Thunder. At 18:15 local time on Sunday, the game begins.

Brisbane Heat played Sydney Thunder tough in their most recent game, but they were unable to prevail. The Sydney Sixers is undoubtedly a better team; thus, the Heat will have another difficult night.

Sydney Sixers is in excellent form right now, as they’ve recently defeated opponents by scores of seven wickets, 34 runs, and six wickets. Ahead of this journey to Brisbane, they are brimming with confidence.

In both innings, the pitch is regarded as favourable for bowling. As the game goes on, it offers pacers a strong bounce and swing.

James Bazley, a bowling all-arounder, made his anticipated return to the Brisbane Heat XI for the loss to Sydney Thunder on Thursday. He appeared to have recovered fully from his hamstring discomfort. Usman Khawaja and Marnus Labuschagne are both once more on international service, and Matt Renshaw has also been called up.

In the victory over Melbourne Renegades on Friday, 34-year-old English speed bowler Chris Jordan made his first appearance of the year. He showed no symptoms of pain in his comeback from injury. Sean Abbott is likely to receive another rest in this game, thus we anticipate seeing the same starting lineup for the Sixers.

This New Year’s Day match in front of a large crowd in Brisbane ought to be great fun. Brisbane Heat has not been in great shape, but their most recent game showed encouraging signs, and we anticipate them to give Sydney Sixers a good game. Overall, the Sydney Sixers have the best bat and ball quality, thus we expect another victory for them.