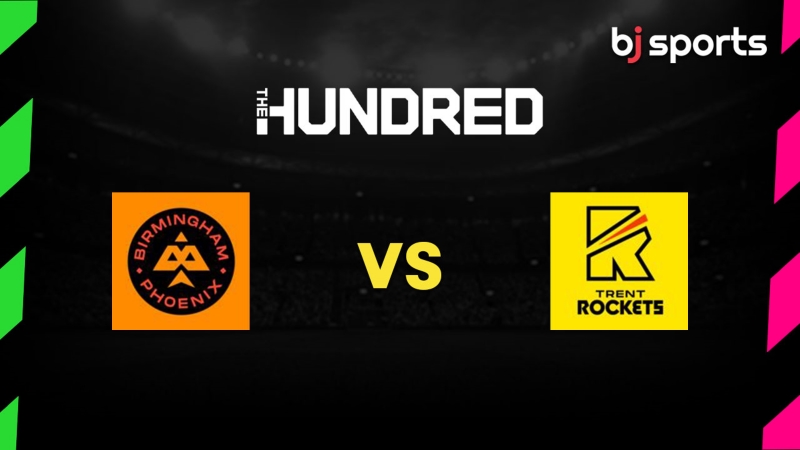 Birmingham In the fifteenth game of the 2022 Men’s Hundred, Phoenix will face Trent Rockets in Birmingham’s Edgbaston on Monday night. Phoenix has played three games so far this season, winning two and losing one. Trent Rockets have won all three of their games. At 18:30 local time, the game begins.

Birmingham Phoenix’s first game of the season ended in a loss, but they have since defeated Southern Brave and Welsh Fire. One of the best batting lineups in the tournament belongs to them.

The Rockets are one of just two teams in the Men’s Hundred to have a perfect record. They have the top two run scorers in the league and might be able to outscore Birmingham Phoenix’s potent bats.

Rain delays during this evening’s game at Edgbaston are possible. The constant temperature will be in the low 20s.

Whenever they have won the toss in the 2022 Men’s Hundred thus far, Trent Rockets and Birmingham Phoenix have opted to field first. This is expected to continue throughout the game.

During the 2022 Commonwealth Games, the Edgbaston wicket gave both pace and spin bowlers numerous chances to take wickets. A par score is one that is no greater than 160.

Prior to the match against Welsh Fire, Miles Hammond lost his spot at the top of the order despite having scored 29 runs as the opener in the first two games. Chris Benjamin was given the chance to open after he slid down the order. Before this game, there won’t be any adjustments, in our opinion.

Joe Root is no longer available for Trent Rockets because England’s preparations for the first Test against South Africa have started. As a result of the IT20 series between Afghanistan and Ireland, Rashid Khan is still unavailable. The Rockets are likely to want to play with the same lineup for this game.

Trent Rockets is the favorite to win this match.

This matchup between two of the top teams in the 2022 Men’s Hundred should be fantastic. There will undoubtedly be many runs scored in this match after Dawid Malan scored 97 not out on Saturday and Will Smeed struck 101 not out during the most recent game at Edgbaston. The Trent Rockets are expected to win for the fourth time in a row.