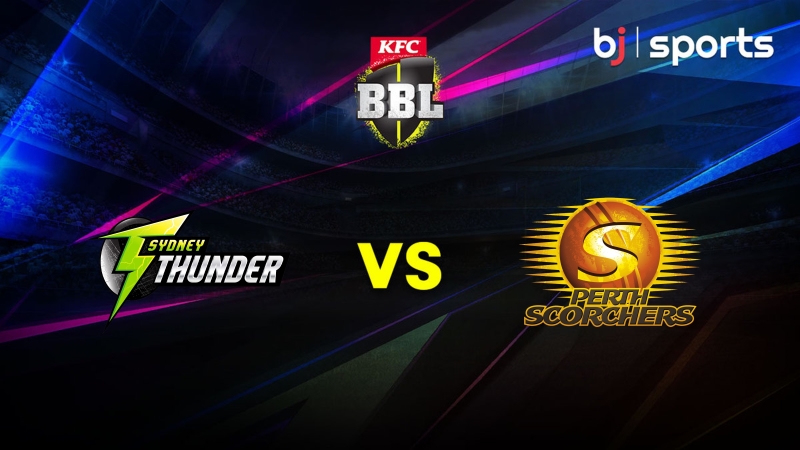 At the Sydney Showground Stadium on Friday night, Match 39 of the 2022–23 Big Bash League pits Sydney Thunder against Perth Scorchers. The Scorchers, who are in first place on the table with seven victories from nine games, are four points ahead of the Thunder going into this matchup. The match kicks in at 18:00 local time.

Prior to their last game’s defeat, the Sydney Thunder were on a great run. They are up against the best squad in the competition so far, but they will be desperate to return to winning ways right away.

In order to avoid losing twice to Sydney Thunder in the BBL group stage this season, Perth Scorchers must perform at their highest level in this match. The Scorchers, though, is in excellent shape.

Sydney will experience fine, sunny, and bright weather without any anticipated interruptions.

Both teams will attempt to bat first because this pitch has a tendency to slow down as the game progresses and make it challenging for batters to chase the target.

Sydney is one of the surfaces that is balanced and has a little assistance for both bowlers and batsmen.

Sydney Thunder will miss the 245 runs Alex Hales scored at the top of the order in BBL12, despite the fact that he made three ducks. In Hales’ place, Thunder will welcome back left-handed starter David Warner from international service. Hales dropped out of the contest to join the ILT20.

Jhye Richardson and Cameron Green are still on the sidelines for the Perth Scorchers because no players are expected to recover from injuries in time for this game. But no matter what starting lineup they use, the Scorchers almost always manage to win.

Perth Scorchers is the favorite to win this match.

Sydney Thunder and Perth Scorchers were tied for first place in the standings after their earlier-mentioned victory. However, over the previous ten days, other teams have caught up to and passed Thunder, and they must win to keep their campaign from regressing. Thunder’s batting could improve with the addition of David Warner, but they are playing the greatest team in the tournament. Overall, we think Perth Scorchers will win again.