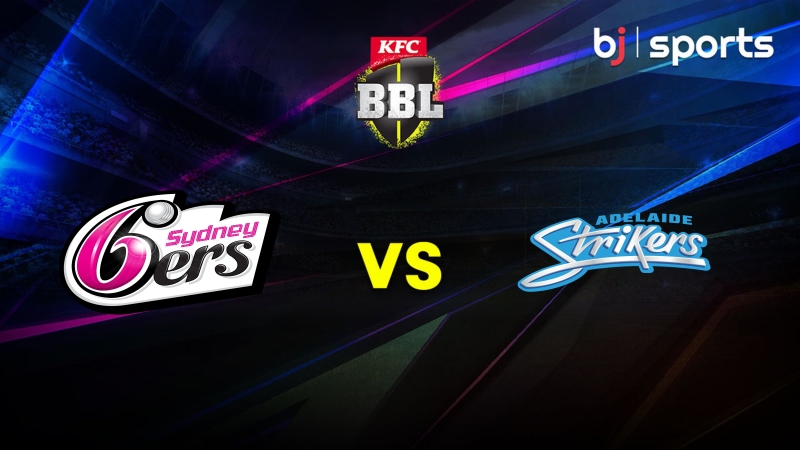 On Tuesday night in Coffs Harbour, Match 45 of the 2022–23 Big Bash League features Sydney Sixers vs. Adelaide Strikers. The Perth Scorchers are in first place, one point ahead of the Sydney Sixers, who are in second place. With 10 points from their first 11 games, the Strikers sit in fourth place. Both clubs still have three group-stage games to play after this match. The start time of this game is 18:45 local time.

After five straight losses, Sydney Sixers eventually defeated Perth Scorchers, and they will be very confident going into this game. It’s perfect timing for the squad that Steve Smith and Nathan Lyon are back.

The Adelaide Strikers must improve their play if they want to make the playoffs. They will draw motivation from their significant victory over Sydney Sixers earlier in the tournament as they prepare for this game.

It will be a sunny and bright day in Coffs Harbour, and there won’t be any expected weather delays.

Teams in chasing have recently had an excellent win-loss record in league games. Due to the batting-friendly surface, both captains will try to keep the trend going in this game as well.

One of the flat fields where the ball will fly off the bat is Coffs Harbour. In this game, bowlers will need to carry out their strategies flawlessly.

In the Sixers XI for Sunday’s top-of-the-table match against Perth Scorchers were Steve Smith and Nathan Lyon. Even though off-spinner Lyon was the most expensive bowler, we anticipate that he will keep his spot in the same lineup for this game.

Chris Lynn, who left the BBL for the ILT20, won’t be playing for the Strikers; Henry Hunt is anticipated to replace him. Colin de Grandhomme of New Zealand, who suffered a slight hamstring injury on January 10th, was already back in the lineup for the previous match.

Sydney Sixers is the favorite to win this match.

Losing Chris Lynn, the Adelaide Strikers’ second-leading run scorer in the competition, will be a major blow for them as they are currently off of the form. Despite this, they still have a ton of skill, and they have players who have been reliable throughout the campaign Matthew Short and Wes Agar. The Sydney Sixers, though, will still be excited following their victory over the Perth Scorchers, thus we are picking them to win this game.