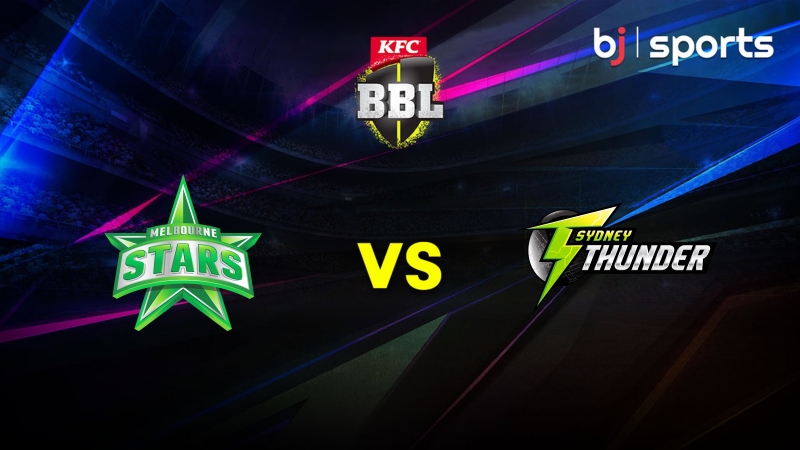 Melbourne Stars and Sydney Thunder will face off in the last group stage game of the 2022–23 Big Bash League on Wednesday night at the Melbourne Cricket Ground. With six points, the Stars will place last in the standings. The Thunder is currently in the final playoff slot, but by the time this game starts, they might no longer be there. The game begins at 18:45 local time in Melbourne.

The Stars lost their playoff series a few games ago, but to their credit, they fought hard against Brisbane Heat on Sunday. The Sydney Thunder can definitely be defeated, thus the Stars should feel confident facing them.

In their last match, Sydney Thunder was all-out for 62 runs, which was their second-worst score in the competition. This indicates that their net run rate is quite low, and they might need to play for a large victory in this game to advance to the playoffs.

There is no chance of rain, but Melbourne’s humidity level will rise as the game goes on. All day long, it will be warmer than 20 degrees.

We anticipate that both teams will want to field first in this game because the humidity is expected to increase in the second innings.

Over the past few seasons at the MCG, the typical T20 first innings score has stayed in the neighborhood of 170. The most successful bowlers at the location this season have been the pace bowlers.

Prior to their most recent match, the Melbourne Stars made two changes. James Seymour and Clint Hinchcliffe were left out, and 20-year-old Campbell Kellaway entered for the first time since Match 31. Marcus Stoinis, who had recovered from a hamstring ailment, also made a welcome comeback.

Gurinder Sandhu, who had been sidelined since December 29th with a calf injury, made a welcome comeback to the Sydney Thunder squad ahead of the Saturday Sydney derby. Joel Davies joined the team in addition to him, replacing Nathan McAndrew, who was replaced by Brendan Doggett.

Sydney Thunder is the favorite to win this match.

We anticipate Melbourne Stars to deliver one of their best performances of the season as they play in front of their home crowd to close up their tournament. Before the game even begins, Sydney Thunder will be fully aware of their obligations, and this clarity of purpose may well work to their advantage. Oliver Davies and David Warner will be expected to score some significant runs for Thunder, although both are capable against this attack. We anticipate a Sydney Thunder victory.