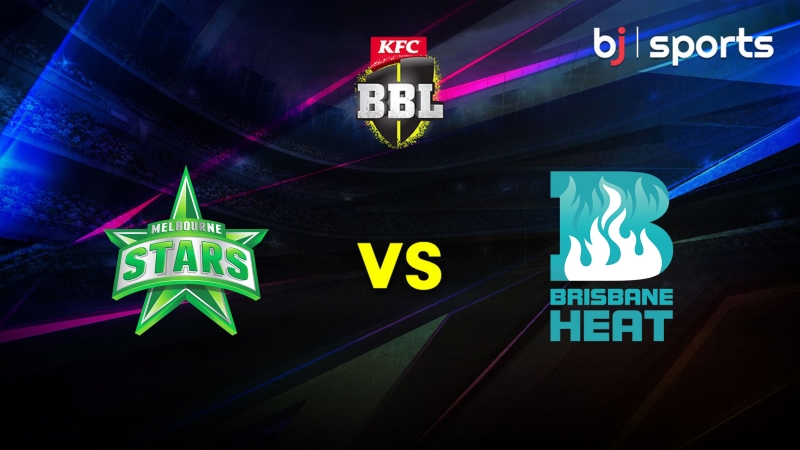 On Monday night, Melbourne Stars will host Brisbane Heat at the Melbourne Cricket Ground for game 44 of the 2022–23 Big Bash League. The Brisbane Heat are only one spot above the Stars in the BBL standings with seven points from ten games, who had six points from their first eleven games. The game begins at 18:45 local time at the MCG.

After defeating Adelaide Strikers, Melbourne Stars fans’ expectations were elevated, but after losing, those expectations quickly faded. To maintain their flimsy chances, the Stars must win this game.

Brisbane Heat waited too long to pull together any victories in order to qualify for the playoffs. However, they may do it and will be confident in their chances in Melbourne now that their Test hitters are back and hitting.

On the day of the game, there will be some cloud coverage and a maximum temperature of 28 degrees Celsius.

In the 22 T20Is, 12 matches, and 34 of the 64 domestic T20s played at the MCG, the teams who started the game with the first ball triumphed. It is more likely that they would feel at ease giving the opposition the first chance to bat.

One of Australia’s most competitive fields is the one at the MCG. It provides a nice balance between bat and ball and gives new-ball bowlers speed and bounces.

This game will come too soon for batting all-rounder Marcus Stoinis, who is still recovering from a hamstring injury. Despite the fact that there are few choices to replace Brody Couch in the lineup after giving up 40 runs in three overs against the Melbourne Renegades, he may find it difficult to maintain his position.

Due to a back problem, Jack Wildermuth was unable to travel to Adelaide on Saturday and isn’t anticipated to be ready for this game. We do not anticipate any changes to the Heat’s starting lineup after Marnus Labuschagne and Matt Renshaw combined to hit a critical 71 runs.

Brisbane Heat is the favorite to win this match.

The stakes before this match could not be higher, even though it is not mathematically assured that either side will be eliminated from this year’s competition if they lose. Both teams will confidently enter this match after previous victories over Adelaide Strikers. We believe that the hitters will decide the game because both teams have strong bowling assaults. We believe Brisbane Heat will have the advantage in that area and are betting on them to win Match 44.