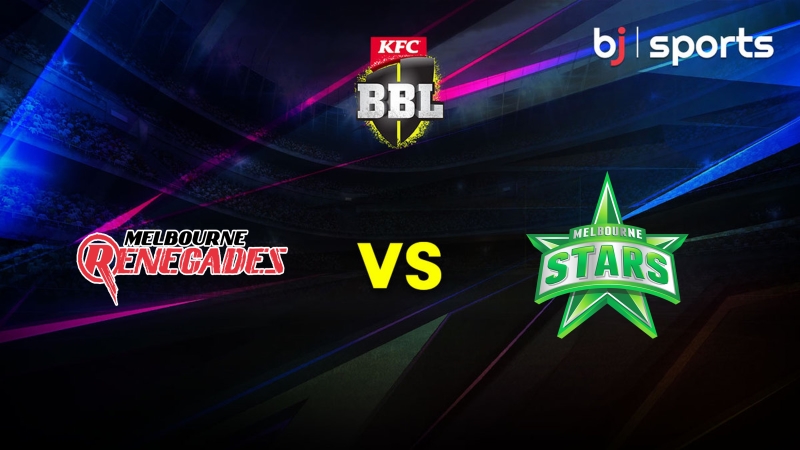 The Renegades take on the Stars in a Melbourne derby at Docklands Stadium on Saturday evening in Match 41 of the 2022-23 Big Bash League. The Renegades enter this game in fifth place, having collected 10 points from ten games. The Stars trail by four points after the same number of matches. At 19:00 local time, the game begins in Melbourne.

Melbourne Renegades fell to fifth place after their loss on Tuesday, although they are still tied on points with the team in third place. They have had a successful season and have powerful bat and ball players who can win this game for them.

The Melbourne Stars’ victory over the Adelaide Strikers was both spectacular and unexpected. If they are to prevent the Renegades from performing the double over them, they must perform at the same high level in this derby.

Saturday will be exceptionally hot in Melbourne, with temperatures reaching 30 degrees at the start of the game. Clear skies are expected throughout the encounter.

At Docklands Stadium, 26 teams have won T20 games after batting first, with 25 teams winning after batting second. We expect the Melbourne Renegades to bat first, regardless of who wins the toss.

The Docklands Stadium has seen average first innings T20 scores of 160+ over the last three years, and we predict pace bowlers to benefit the most from this pitch.

There are no fresh injuries for the Melbourne Renegades, who do not have any returning Test players. Despite losing to Adelaide Strikers in their last game, they still produced 182-6 and we expect the same XI to be named.

With Marcus Stoinis out due to a hamstring injury, the triumph over the Adelaide Strikers on Thursday was even more stunning. The bowling attack, which had been underperforming all season with the exception of Luke Wood, was outstanding against the Strikers.

Melbourne Renegades is the favorite to win this match.

A Melbourne derby in the BBL is always a special occasion for the players and fans, and this match will be no exception, as the Stars still have a chance to finish ahead of the Renegades this season. We anticipate a competitive game, with the Melbourne Stars coming into the game full of confidence after their most outstanding performance of the season against the Adelaide Strikers. We expect Melbourne Renegades’ veteran hitters to have high-scoring performances, and we forecast Melbourne Renegades to win.