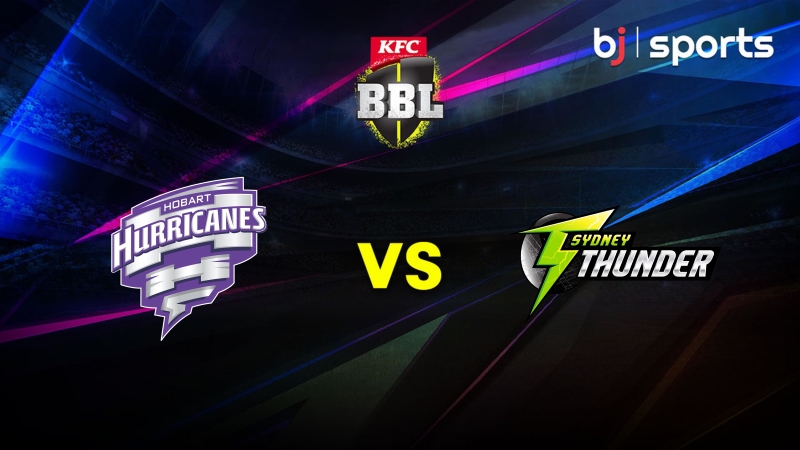 On Sunday afternoon, the sixth-placed Hobart Hurricanes will play host to the fifth-placed Sydney Thunder in game 42 of the 2022–23 Big Bash League. So far in the competition, the Hurricanes have nine games and eight points. Thunder has two points more than Thunder due to playing one more game.  At 13:10 local time in Hobart, the game begins.

The Hobart Hurricanes will be very confident after their victory in the last game, and with their captain back in the lineup, they will be even more convinced that they can win this game.

Sydney Thunder was a top-tier contender when 2023 first began, but over the past few weeks, they have plummeted quickly down the standings. To win in Hobart, a significant turnaround is required.

In the evening, there will be a 2% chance of precipitation and a temperature of around 13°C. Around 11 kph of wind speed and 57% humidity are forecast. Fair weather makes for a good cricket match.

The team that wins the coin toss, in our opinion, should bowl first.

This season, pace bowlers have generally had the best results on this ground.

We anticipate Captain Matthew Wade to rejoin the Hurricanes XI for this game after sitting out the two-wicket victory over the Melbourne Stars owing to personal reasons. The sole change from Match 35 is anticipated to be the exclusion of left-arm spinner Tom Andrews.

David Warner played in his maiden BBL12 game during Sydney Showground Stadium’s dreadful loss to Perth Scorchers on Friday. We anticipate that the club management will remain with the same starting XI for this matchup because no players left that game with any injury complaints.