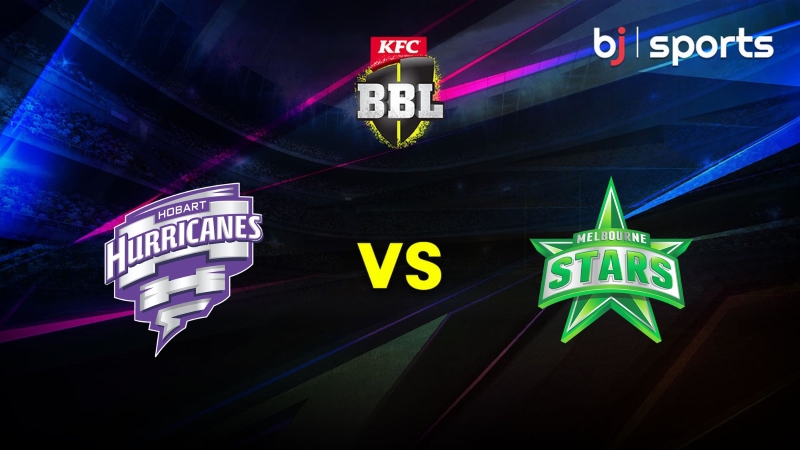 On Monday night at the Bellerive Oval, Match 35 of the 2022–23 Big Bash League pits the Hobart Hurricanes against the Melbourne Stars. With six points, the Hurricanes are in sixth position, while the Stars are at the bottom of the standings with four points. The previous two games for both teams ended in losses. At 19:15 local time in Hobart, the game begins.

Although the Hobart Hurricanes have performed better than their league standing would suggest, they cannot spend the entire season moping around. They have a great hitting lineup; thus, we anticipate them to win this game.

Since defeating the Hurricanes in Match 4 of this season, Melbourne Stars have only won one game. In this game, they should be competitive once more, but they will face some very powerful batters.

The match will take place under a cloudy, humid, and mild climate with a high of 16 degrees. No delays are anticipated due to rain.

In T20 games at this location, teams that bat first enjoys a significant advantage over those that field first. Both sides should aim to establish a total that they can then defend in the second inning.

This pitch typically results in totals over 175 despite a few remarkable seasons. The surface should produce a ball with good velocity, and the bowlers should have good carry.

Patrick Dooley, a left-arm wrist spinner who lost to the Melbourne Renegades, injured his finger while warming up, therefore it would be surprising if he played in this game. The Hurricanes want to put a stable team together as quickly as possible after losing Jimmy Neesham and Shadab Khan to international call-ups.

The Melbourne Stars have been able to field almost their entire roster throughout this season, which is unusual for other teams. Since their last match, nobody has joined Glenn Maxwell and Joe Burns in the treatment room, and they are still chronic absentees.

The two teams competing in this game have never claimed the BBL championship, and based on their recent performances, it is improbable that they will do so this year. However, both teams have certain players who are in excellent form, so we anticipate a fun game. We are supporting the Hobart Hurricanes to win this match because their hitters have been more reliable in recent games.