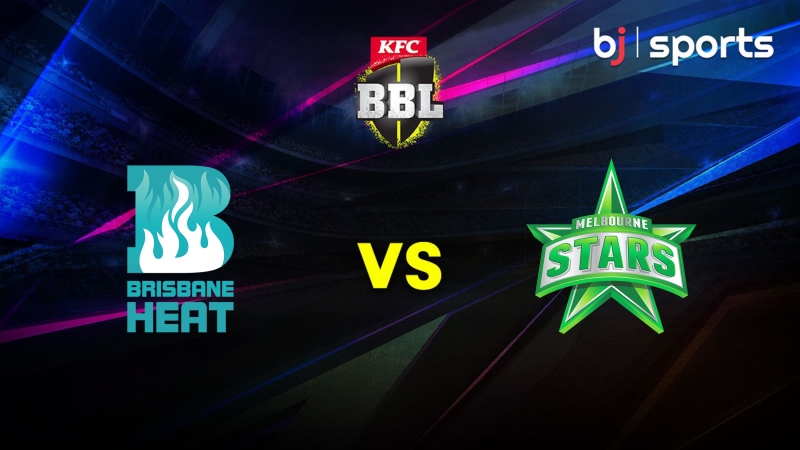 On Sunday afternoon at the Gabba, Game 51 of the 2022–23 Big Bash League pits Brisbane Heat against Melbourne Stars. With 11 points from 12 games, the Heat are in fifth position and have won three straight games. Melbourne Stars are at the bottom of the standings and are out of the competition. Brisbane kicks off the game at 13:10 local time.

After winning their last three games, the Brisbane Heat are feeling good about themselves. They defeated Melbourne Stars on Monday by a single ball, and they will be confident of winning again in this game.

Melbourne Stars have had a terrible tournament as they have dropped their past two games by tiny margins. Their prospects of moving on in the competition would not change if they won at the Gabba.

A high of 28 degrees Celsius is predicted with partly overcast skies.

Teams batting first have triumphed 7 times in the 10 T20Is that have been played at The Gabba thus far. In this season’s four games, the club batting first won three of them. The two sides should choose to bat first, which would be great.

The pitch at The Gabba is evenly distributed. The surface offers a lot of potential for both bowlers and batsmen.

It would be a great surprise if the starting lineup changed after three victories over the Adelaide Strikers, Melbourne Stars, and Hobart Hurricanes in the previous week. In his current state, Matt Renshaw might advance up the list one spot.

Marcus Stoinis is close to being fully healthy, but since the Stars have already been eliminated from the tournament, it appears doubtful that he would be put in danger before this match. The Stars have been in contention to win their last two games, so it wouldn’t be unexpected to see them carry over the same lineup for this contest.

Brisbane Heat is the favorite to win this match.

Although the bowling units of both sides are good, the Brisbane Heat are currently playing with much greater assurance when using the bat. Melbourne Stars might visit the Gabba and put on a strong show, but we don’t believe they have what it takes to defeat the hot Brisbane Heat. We expect Brisbane Heat to triumph once more.