At the Hagley Oval in Christchurch on Friday afternoon, Bangladesh and Pakistan will play in the opening match of the New Zealand Men’s T20I Tri-Nation Series. At the end of the previous month, Bangladesh defeated UAE 2-0 in an IT20 series. England won the most recent home series against Pakistan 4-3. The game starts at 15:30 local time.

This Bangladeshi team is being seen with modest expectations given that they only defeated PNG and Oman at the World Cup last year. Since then, they have defeated Zimbabwe and Afghanistan.

Although they were competitive for the majority of the matches, Pakistan will nonetheless be frustrated that they were unable to defeat England in the series. They will be certain that they can win right away in Christchurch.

The forecast calls for bright skies and a peak temperature of 11 degrees Celsius.

The statistics indicate a fair distribution of victories at this venue between teams batting first and second. In one of the two T20Is that were played here, the team that batted first won. However, among the 33 domestic T20 matches played at this venue, teams batting second won 16 of them. It barely matters which team chooses to bowl or bat first on a balanced pitch. All that matters is who plays better cricket that day.

The seam and swing bowlers typically respond to this pitch the best. A par score should fall between 170 and 180.

Shakib Al Hasan was playing for the Guyana Amazon Warriors in the Caribbean Premier League, hence he was unable to attend the most recent two-match series against the UAE in Dubai. He will rejoin the group and take over as captain, with Nurul Hasan switching back to vice-captaincy.

Shaheen Shah Afridi will not participate in this game or any of the remaining games in this series, despite the fact that he is a member of their roster for the 2022 T20 World Cup. The team’s lack of middle-order runs has been an issue for some time, so the players in those spots must turn in reliable innings. 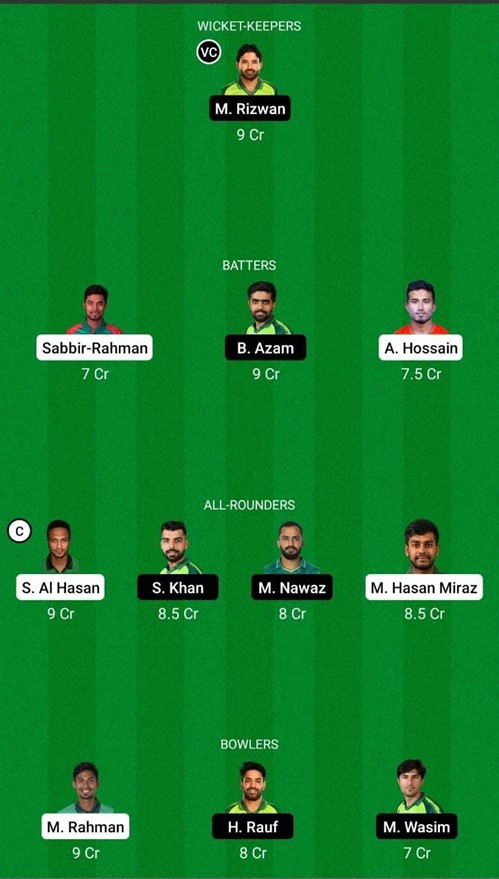 Men’s Cricket fans haven’t witnessed an international tri-nation series in a long time, so this one is generating a lot of anticipation. We anticipate Pakistan to easily win this match despite the fact that Bangladesh and Pakistan will be playing in much colder temperatures than they are used to.