Before the World Cup warm-up match, the Bangla Wash tri-nation T20 cricket tournament started in New Zealand on October 7. Bangladesh played against Pakistan in Christchurch, New Zealand in the first match of the Bangladesh Wash tri-nation cricket series. Batting first, Pakistan set a good target. But Bangladesh could not reach the target as the scheduled 20 overs ended. As a result, they have to leave the field with a loss. Mohammad Rizwan won the man of the match title for Pakistan by batting brilliantly.

The pair of Babar Azam and Mohammad Rizwan could not stand, but Rizwan alone was enough for Pakistan. Pakistan threw a challenging target of 168 runs in front of Bangladesh with his brilliant batting. Babar Azam and Mohammad Rizwan kept batting nicely at the beginning. After many attempts, captain Sohan succeeded with the first ball of the 8th over. After scoring 52 runs in the opening pair, the pair were separated by Miraz. Babar Azam scored 22 runs off 25 balls. After the dismissal of Babar Azam, Shan Masood was slowly becoming a threat in partnership with Mohammad Rizwan. But he was caught out after scoring 31 runs off 22 balls by Nasum Ahmed and left the field. Masood hit 4 boundaries and 1 six.

Haider Ali could not last long after coming down to bat. He scored only 6 runs off 6 balls. Iftikhar returned with a catch by Afif Hossain Dhruva off Hasan Mahmud in the second ball of the 18th over. He scored 13 runs off 8 balls. Then Asif got out for just 4 runs. Mohammad Nawaz remained unbeaten with 8 runs.

Mohammad Rizwan remained undefeated in the end. Pakistan’s wicket-keeper batsman scored 78 runs off 50 balls. He hit 2 sixes with 7 boundaries. Among the Bangladeshi bowlers, only Taskin took 2 wickets. Miraz, Hasan Mahmud, and Nasum Azmed got 1 wicket each.

168 runs is not a very big target. Victory is possible if you keep the wicket and keep the wheel of runs moving in order. Two makeshift openers Mehidy Hasan Miraj and Sabbir Rahman batted with that target. 25 runs were also added to the duo. But Mehdi Hasan Miraj departed after scoring 10 runs off 11 balls. Sabbir Rahman also got out by making almost the same mistake. He scored 14 runs off 18 balls.

After two openers Mehidy Hasan Miraj and Sabbir Rahman departed with a gap of 12 runs, Liton-Afif tried to form a pair. A pair of 50 runs was also formed with the bat of the two. They took the team score from 37 runs to 87 runs for 2 wickets. But this is when the disaster happened. Pakistani slow left-arm orthodox spinner Mohammad Nawaz got two wickets in two balls. Liton Das (35) and Mosaddek Hossain Saikat (0).

Afif Hossain Dhruba got back with a catch by Mohammad Wasim off Shahnawaz Dahani after scoring 25 runs off 23 balls. Nurul Hasan Sohan departed after playing 9 balls and scoring 8 runs. Even in the 19th over, Bangladesh lost two wickets in two consecutive balls. Taskin scored 2 runs and Nasum Ahmed got out on the next ball.

In the end, losing 8 wickets, Bangladesh stopped at 146 runs. Yasir Ali Rabbi remains unbeaten on 42 runs off 21 balls. He hit 2 sixes with 5 boundaries.

Player of the match – Mohammad Rizwan 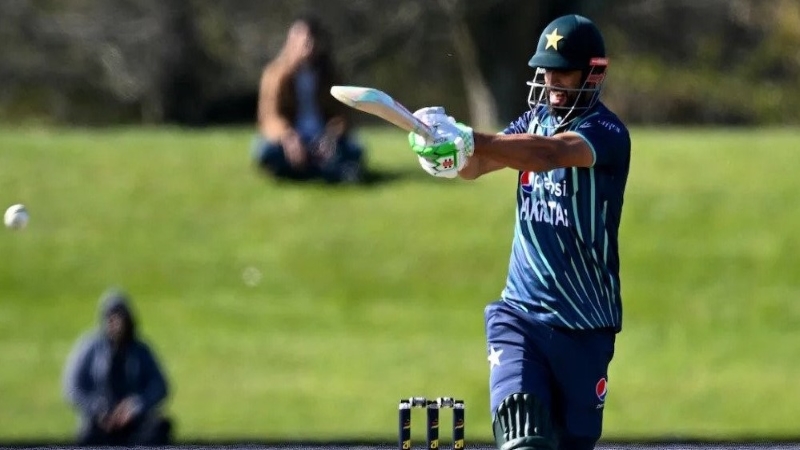